Posted on November 10, 2019 by Sarah Driskell under General
Leave a comment

Today and every day we are grateful for the men and women who protect and serve our great country.

Veterans Day is held on November 11th each year. It is a day to honor all veterans who have served in the United States Armed Forces. It is a day to celebrate their bravery and sacrifice.

Veterans Day was originally known as “Armistice Day” and was a day to honor the end of World War I, originally held on November 11, 1918. On June 1, 1954, the 83rd US Congress named November 11th “Veterans Day” after World War II and the Korean War had ended to honor veterans of all wars.

Many people do different things to observe Veterans Day, some people wear a red poppy, or flower, which is a symbol of remembrance, place flags on headstones in cemeteries, hang flags at their home or in their work place, donate to veterans organizations or volunteer, hold a moment of silence, attend local celebrations, put together care packages for those who are overseas, visit a veterans hospital or a nursing home.

No matter how you chose to observe Veterans Day, remember to think about and appreciate the service of the brave men and women who have made the sacrifice to stand for our country. 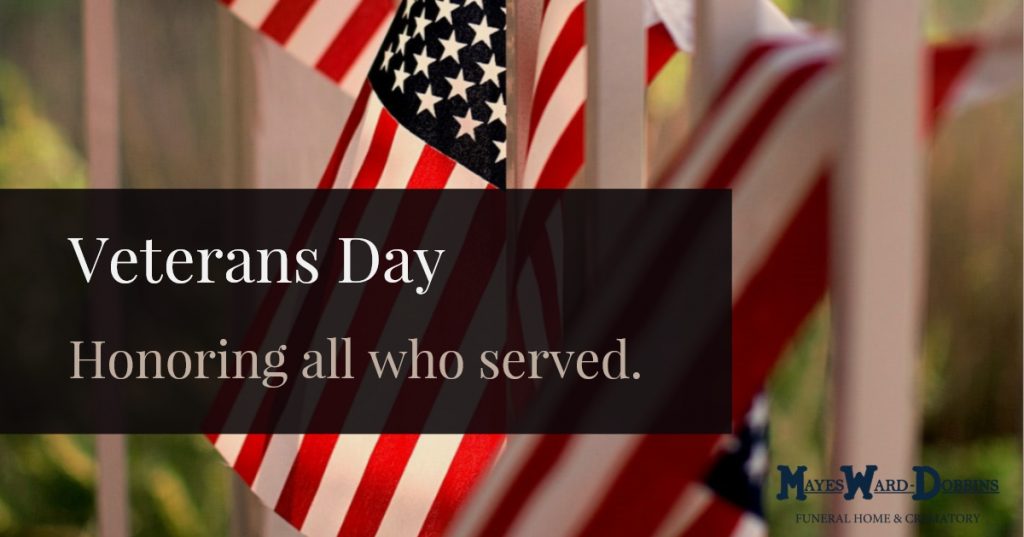 Sarah grew up in Dallas, Georgia and graduated from East Paulding High School in 2007. She attended Reinhardt College in Waleska, Georgia. She became a part of the Mayes Ward-Dobbins family in 2013. Sarah has two children, Ashlynn (7) and Easton (3). She enjoys spending time with her family, baking, reading, decorating, and being outdoors. She greets families with a warm smile and a caring heart.