Till Death Do Us Part…

Posted on December 1, 2015 by J. Chad Pendley under Women & Grief
Leave a comment

This article was recently published on wives of the Pendley Funeral Directors.

Not many little girls’ dreams go like this: One day I’m going to grow up and fall in love and get married … to the undertaker. But for these four ladies, that’s how their fairytale unfolded, marrying into the Pendley family with husbands that run Mayes Ward-Dobbins Funeral Home in Marietta and Macland Chapel in Powder Springs. This is their story.

Terry Pendley started working as an ambulance driver for a funeral home when he was a student at McEachern High School. Like most teenage boys, at first it was about the automobile. “Terry and I dated all through high school,” says Darlene, now his wife of 40 years. “He would come by my house with the [ambulance] lights going. On dates, I was usually in my blue jeans, and he’d be in a suit and tie. He just looked like a little undertaker!”

But, as Terry was around the business more, he became inspired by the impact he could have on a family’s life during their darkest hour. He decided this was his permanent career path and eventually took the helm at Marietta’s longstanding Mayes Ward-Dobbins, later adding Macland Chapel, as well.

“We never set out for this to be a family business, though,” says Darlene, who joined Terry fulltime when she retired in 2000. “Our sons all went to college on another path, but they each, one by one, ended up here. I think it’s God’s purpose for our family. We’ve been called to help other families through this time.”

It’s not always easy, though, for her to see sons Jason, 37, Chad, 33, and Shane, 28, carry such a heavy burden. “Sometimes, especially if a child is involved, Jason will come into my office after being with a family and sit down and sob. It is very hard for me to see…” Darlene’s voice breaks. “But then we will pull together and get through it and do everything in our power to help the family get through it. That’s why it’s a calling.”

Jason’s wife, Summer, admits there were times, early on, when Jason wasn’t sure he could do it. “I remember when he first started, they had a baby’s service and he didn’t know if he could go on. He was 22 and having to process that,” she says. “But he has learned to channel that grief into each service he plans. He thinks of it like, ‘This is their final moment here on this side of eternity and the family’s final moment to celebrate their child or their mom. If we don’t honor them in this, that’s it. This is their final memory.’”

This level of dedication often means the Pendley men work 24/7, but their wives say they married them with eyes wide open. “It’s definitely not an 8-to-5 job,” admits Kristin, Chad’s wife. “But, seeing Chad interact with each family amazes me. He puts his whole heart into it, and I’m so proud of him.”

“It’s really not a job to them; it’s a ministry,” echoes Shane’s wife, Laura. “They come alongside people when they need it the very most, which is incredibly rewarding.”

“Sometimes people have this raised-eyebrow look when we tell them what we do, but it’s really not like that,” says Summer.  “It’s a special life … but the thing is, we’re not special people. We’re just normal people trying to be a light where it’s impossibly hard to see one.” 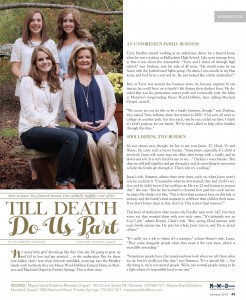 Chad is a licensed professional and is a native of Cobb County, growing up in Powder Springs and currently living in Marietta Ga. After graduating from McEachern High School Chad attended Gupton Jones College of Funeral Service and graduated as a Master Artist of the Pi Sigma Eta Honorary Mortician Fraternity. He was the recipient of the Bill Pierce award and Daniel E. Buchanan award, recognizing him as a leader in the funeral profession. A member of the Marietta Metro Rotary and different organizations in his profession, Chad also participates in monthly activities promoting the funeral home and networking with other professionals in the area. He is a member and attends Westridge Church in Dallas Ga. He is married to Kristin and as a proud father, Chad enjoys the time he gets to spend with his family. Chad is an avid hunter and a true outdoors man. He has a gift of developing a warm, helpful, and strong relationship with the families he serves and is a valuable source of knowledge at Mayes Ward-Dobbins.