History of “Taps” and how we help render those honors…

Posted on September 19, 2014 by J. Chad Pendley under History of Taps
Leave a comment 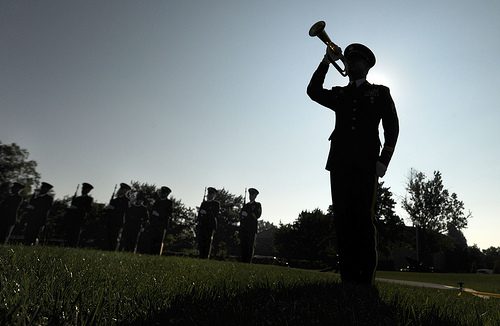 Something that we always get asked about is the presentation of Taps during a funeral ceremony. People wonder exactly what the song means and why do some people stand at attention when they hear “Taps”.  There is both history and tradition staked into this presentation, so much meaning that needs to be known, and of just how important this presentation is and how we should help render those honors.

The story behind Taps of its beginning is still being debated to this day.  Scholars and researchers have pursued the origination of this melody but what is not debated is its meaning.  There are two main variations to “legend” in regards to its origin, the first being a Union Captain in the Civil War named Robert Ellicombe heard the moan of a soldier one night near Harrison’s Landing in Virginia.  He decides to investigate and discovers that the solider, who is wearing a Confederate uniform, has died.  By the light of his lamp, he realizes to his surprise and horror that the dead solider is his own son.  The son who had studied music in the South and without telling his father, had enlisted in the Confederate Army.  The grief-stricken father requests a military burial for his son, complete with an army band.  His superiors declined, however, because his son was an enemy soldier, but give him the choice of one musician.  The father chooses a bugler and using a short piece of music he found in his son’s uniform, the tune for “Taps” comes into being and has been used ever since for military funerals.

The second variation was from Union General Daniel Adams Butterfield who called a brigade bugler to his tent after a bloody battle in July of 1862 and showed him some notes written in pencil on the back of an envelope.  He asked the bugler to sound them out on his bugle and after several times of hearing the music he changed it somewhat, lengthening some notes and shortening others, but retaining the melody as he first gave it.  After getting it to his liking he directed the bugler to sound that call for “Taps” in place of the tune “Lights Out” during regulation call from that point forward.  From that time on it was picked up and used widely throughout the Army of the Potomac and was adopted as the standard tune.

Taps was soon adopted throughout the military in 1874 and it became standard at military funeral ceremonies in 1891.  This tune was reserved for funerals and special ceremonies and is being used still for that purpose today from the boy scouts to the U.S. Military.  Through both variations of the origin, the original tune is still intact even though today there are new words to this melody, these are thought to be the original lyrics.

Day is done, gone the sun 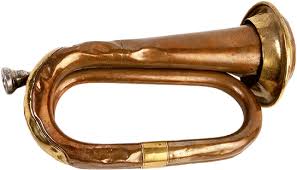 From the lakes, from the hills, from the sky
All is well, safely rest
God is nigh.

Fading light dims the sight
And a star gems the sky, gleaming bright
From afar, drawing near
Falls the night.

Thanks and praise for our days
Neath the sun, neath the stars, neath the sky
As we go, this we know

So when you are attending a funeral for a veteran and you hear this melody you will know the history but you should also know what you are supposed to do as an attendee.  For us as civilians the proper response is to remove any headdress and place your right hand over your heart, the same way you would pay honor during the Pledge of Allegiance, and those who are standing should face the bugler.  You will see those in military uniform actually salute during Taps and that is because that is how they pay honor and respect.  As you can see, this tune is steeped in American history and revered as the last sign of ritual respect that the military can provide and all of us as U.S. Citizens reserve the right to pay the same honor and respect for those who have fought for our freedom.

Chad is a licensed professional and is a native of Cobb County, growing up in Powder Springs and currently living in Marietta Ga. After graduating from McEachern High School Chad attended Gupton Jones College of Funeral Service and graduated as a Master Artist of the Pi Sigma Eta Honorary Mortician Fraternity. He was the recipient of the Bill Pierce award and Daniel E. Buchanan award, recognizing him as a leader in the funeral profession. A member of the Marietta Metro Rotary and different organizations in his profession, Chad also participates in monthly activities promoting the funeral home and networking with other professionals in the area. He is a member and attends Westridge Church in Dallas Ga. He is married to Kristin and as a proud father, Chad enjoys the time he gets to spend with his family. Chad is an avid hunter and a true outdoors man. He has a gift of developing a warm, helpful, and strong relationship with the families he serves and is a valuable source of knowledge at Mayes Ward-Dobbins.